WATSON: For Elected Officials who won’t roll up their sleeves– “shame on them”.

In a recent news report published in the Clarion Ledger on education, Lieutenant Governor Tate Reeves questions the timing of the inquiry into Common Core standards by myself and my colleagues in the Mississippi Senate Conservative Coalition. One might think based on his comments that bad policy has a statute of limitations by which it can no longer be challenged.

I find that premise to be ludicrous. Mississippians don’t want more political positioning, they want solutions, and as more information is made available we are finding that Common Core is not the solution for Mississippi. As is often the case, it is another example of government creating more complex problems.

The Lt. Governor was quoted in the article as saying: “For those individuals who were in the Legislature four years ago, who didn’t say anything but now decided they are going to complain — shame on them.”

Had the Lt. Governor asked someone who was in the legislature in 2010 before making such a reckless charge, he would have found that a vast majority of the legislature had never heard of Common Core.

It sounds as if the Lieutenant Governor believes just because something is adopted by the Board of Education it becomes untouchable and beyond review. I certainly think not. My constituents elected me to represent them fully. I am not beholden to unelected bureaucrats’ ideas of ‘progress’, and take seriously my responsibility of oversight.

We have a window of opportunity to talk candidly about real education solutions in Mississippi. The Mississippi Senate Conservative Coalition has decided to do so and has met with teachers, superintendents and parents from across the state to launch the conversation.

It’s unfortunate that some in leadership refuse to protect the rights of Mississippi parents, and to protect the privacy of Mississippi children. It’s also unfortunate that some in the Mississippi Legislature will stand idly by and allow the Department of Education to divest themselves of their mission, while having the temerity to demand more money to pay for administrative salaries that have no positive effect on the classroom.

Any legislator or legislative leader willing to sacrifice the duty of oversight and the education of our children out of personal political trepidation should allow someone else who is willing to do the hard work take their place.

I’ve spent six years debating the need for competition in education to pass public charter schools legislation. To watch the fruits of that labor negated by a one-size-fits-all national testing experiment is unthinkable and irresponsible.

Elected leaders who do not take this time to fully digest the reality of the situation and develop a plan that works to the benefit of Mississippi students will invite plenty of shame. I do not intend to be among that number.

There are many things we can do to develop the highest education standards right here in Mississippi without dependence on a consortium of bureaucrats with no responsibility towards or understanding of the unique needs of the people of our state. We have some of the best educators in the country here in Mississippi, and numerous examples of the highest standards in every discipline. I know this because I met with seven of our finest teachers, board members and administrators yesterday, and have talked to many more in the last two months.

The Mississippi Senate Conservative Coalition will look closely at solutions for Mississippi parents, students and teachers. Decades of allowing bureaucracy to reign unchecked and without serious questions have gotten us to this point. We must stop looking for a federal rescue, or the latest fad in policy or bureaucratic formulas to save us. We must begin taking seriously our responsibility to address these problems with courage, hard work and tenacity, and we can and should bring out the best Mississippi has to offer to do it.

Some politicians need to roll up their sleeves and get in the trenches with us instead of sticking with the status quo and saying, “it’s too late”.

If elected officials can’t make that commitment–“shame on them”.

About Michael Watson: Michael is a an attorney and Republican State Senator from Pascagoula, Mississippi. He drafted and helped guide SB 2988, Mississippi’s first law dealing with illegal immigration, into law during his freshman year in the MS Senate. A major proponent of education reform, he has extensive knowledge in charter schools and issues related to school choice. 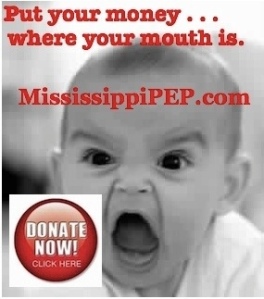 9 thoughts on “WATSON: For Elected Officials who won’t roll up their sleeves– “shame on them”.”